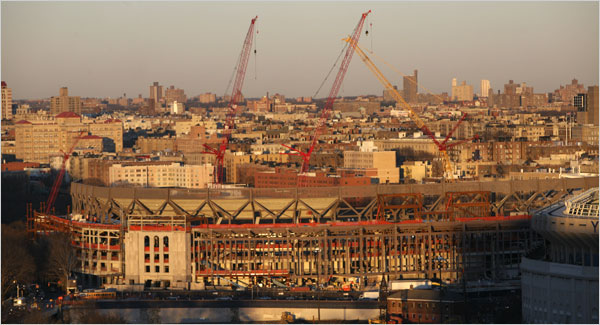 The new Yankee Stadium, with a 2009 target date, is being built near the old one in the Bronx.

Several years ago, as the Yankees negotiated to build a new stadium in the South Bronx, the neighborhood faced the realities of a massive construction project in its midst: parks would be closed and moved, traffic would be horrendous, life would be, for a while, a hassle.

So, as one way to make up for these inconveniences, the Yankees and elected officials signed a community benefits agreement. It required that the team would give roughly $1.2 million a year, starting when the work began, to various community groups through a special panel. The deal was similar to agreements in other major projects, like Atlantic Yards in Brooklyn and Columbia University’s expansion into Harlem.

But nearly 17 months after construction began, as workers race to complete the new Yankee Stadium by opening day 2009, none of that money has been distributed, and the group responsible for administering it has never met.

The seven-member panel also has not chosen a permanent chairman, registered as a charity with either the Internal Revenue Service or the state attorney general’s office, or selected recipients for $800,000 in grants or $450,000 in free tickets, merchandise and athletic equipment.

Elected officials have complained that they are in the dark.

“I feel embarrassed because I don’t know anything about what’s going on,” said City Councilman G. Oliver Koppell, who represents the northwest Bronx. Mr. Koppell had suggested that the Bronx council members meet to discuss the agreement. “I was involved when we negotiated it, but I have not been involved since. I urged that we have a Bronx delegation review, but nothing’s happened.”

The Yankees say the community groups will get all of the money that they agreed to give according to the community benefits agreement, or C.B.A., including the first 17 months’ worth, once the panel meets. Alice T. McGillion, a team spokeswoman, said that the money was in an escrow account and that the club was not responsible for the delays.

“Please ask Bronx Boro President’s office about any delays in the fund and advisory panel being set up,” Ms. McGillion wrote by e-mail. “As the CBA specifically states the fund and its establishment is independent from the New York Yankees.”

The Bronx borough president, Adolfo Carrión Jr., has been “too busy” for the past three weeks to discuss the stadium fund in an interview, said his spokesman, Michael Murphy. Last month, Mr. Carrión announced his candidacy for city comptroller in 2009. But Mr. Murphy wrote in an e-mail message that the process to release the money to community groups was moving along.

“There were many people deciding who would be the most appropriate candidates for the panel,” Mr. Murphy wrote, in explaining the delays. “It took time for people to look at the list and come to a consensus.”

The fund was part of the agreement and was to be established the day stadium construction started, Aug. 17, 2006, and distributed annually through 2046.

The agreements are enforceable by courts, but officials who normally ensure that the terms of a contract are carried out — such as the city comptroller — have no oversight because municipal money is not involved.

The agreement for Yankee Stadium was unusual, however, because it was not negotiated or signed by community members. It carries only the signatures of four elected officials, who said they were acting on behalf of the community, and a representative of the Yankees.

None of the officials who signed the agreement agreed to be interviewed for this article. The signatories were Mr. Carrión; Randy L. Levine, the president of the Yankees; and Bronx City Council members Maria Baez, Joel Rivera and Maria del Carmen Arroyo.

Mr. Murphy referred most questions related to the fund to the Yankees, or to the panel itself, but he would not disclose the names of its members, with the exception of the group’s acting chairman, Serafin U. Mariel.

Mr. Murphy would not say who had selected Mr. Mariel, 64, a Manhattan resident who is the former president and chief executive of New York National Bank.

Mr. Mariel, who, campaign finance records show, has donated to the candidacies of Mr. Carrión in the past, acknowledged that the group was far behind schedule. “It has taken some time to choose the advisory panel, but while some of that time has been lost, I don’t think any of the funding commitment will be lost,” Mr. Mariel said during a telephone interview last month.

“I am in the process now of arranging a meeting of panel members so they can meet each other and establish guidelines,” Mr. Mariel said.

Councilwoman Helen Diane Foster, who represents the High Bridge neighborhood and who opposed the stadium, said she had neither been briefed nor been asked for an opinion on the board. She said she had sent letters requesting information to Mr. Carrión and to council members Ms. Baez and Ms. del Carmen Arroyo without response. “I have no idea how people were selected to the panel,” she said. “It concerns me, but I’m also wise enough to know that a lot of people are hinging careers on how great this deal is, so I’m not surprised we haven’t had this conversation.”

However, Mr. Carrión’s spokesman, Mr. Murphy, said that the borough president was open to discussing the issue with other elected officials. “This process has been participatory since the beginning,” Mr. Murphy wrote via e-mail. “Every Bronx elected official can at any time address his or her concerns directly to the Borough President. He has an open door policy regarding addressing any concerns his colleagues might have.”