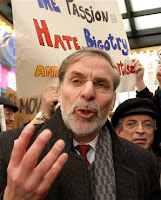 At a recent gathering of Assemblyman Dov Hikind's newly formed Jewish-Black Coalition, which was held at Yeled V'Yalda in Boro-Park, Hikind announced that the only way for the two communities to fight the hate plaguing them was to band together. He also said that a lot of people had no idea what it meant to be a victim of a crime because of the color of their skin.

Hikind further said that he wanted to do "real stuff" to make sure that such violence would come to an end. Hikind stated that one of the things that he thought would help would be to "bring someone from the Black community to talk about their experiences of discrimination."
Leave Comment ---This article posted by Chaptzem : 6:38 PM3 comments
Posted by Unknown at 11:58 AM