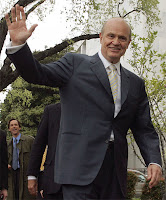 What was that joke about President Calvin Coolidge? When writer Dorothy Parker was told that Coolidge had died, she said "How could they tell?"
Who could be blamed for reacting like that to the news that Fred Thompson, the actor and former senator from Tennessee ,had dropped out of the race for the Republican presidential nomination?

Was he ever really in the race? A lot of people had their doubts.
Thompson, who got in the race late after seemingly taking forever to decide, had said that he had to do well in South Carolina in order keep his bid going. South Carolina Republicans weren't motivated enough by that ultimatum to make it happen for him. He came in third place, with 16 percent of the vote.
Thompson had hoped to win the votes of the parties conservative base, especially social conservatives.

But many of those voters went to Mike Huckabee, the former Arkansas governor. Others have held their nose and voted for Sen. John McCain, the senator from Arizona who has infuriated conservatives over the years because of his history of occasionally breaking ranks with other conservatives, including on issues like campaign-finance reform and immigration.
Mitt Romney, the former Massachusetts governor also appealed to some of those voters Thompson hoped would naturally gravitate to him.

Thompson, who has kind of a blood-hound demeanor, never seemed to get going. He appeared to lack the fire in the belly that is necessary for the long haul of a presidential campaign. He just never seemed to have "what it takes" the title of Richard Ben Cramer's famous book about the drive it takes to reach the White House.
Posted by Unknown at 4:27 AM