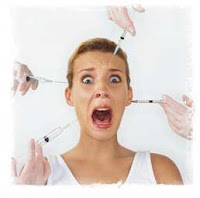 WASHINGTON (Jan. 24) - Botox and a similar injection should come with strong warnings following reports of 16 deaths and other serious problems after the botulinum toxin spread inside the body, a U.S. consumer group said on Thursday.Public Citizen asked U.S. authorities to require the strongest possible warning, highlighted in a "black box," on Allergan Inc's Botox and Solstice Neuroscience Inc's Myobloc.

Botox is famous for smoothing facial wrinkles but also has approved medical uses such as treating cervical dystonia, or rigid neck muscles. Myobloc is cleared only for the neck condition.Both injections are made with forms of the botulinum toxin, which can paralyze muscles.Public Citizen said it reviewed 180 reports submitted to the Food and Drug Administration by manufacturers involving patients injected with Botox or Myobloc.

The reports detailed cases of muscle weakness, difficulty swallowing or aspiration pneumonia, a serious condition caused by breathing a foreign material into the lungs.Reports to the FDA do not prove a product caused a particular problem, but the agency uses them to look for patterns of potential complications.Officials at Allergan, Solstice and the FDA could not immediately be reached for comment.Sixteen of the cases reported were fatal, including four involving children under 18, Public Citizen said. Some patients were hospitalized.

Dr. Sidney Wolfe, director of Public Citizen's Health Research Group, said such problems can occur if botulinum toxin spreads from the injection site to the esophagus, causing partial paralysis. Instructions for Botox and Myobloc mention the issue but it is easy to miss, he said. Public Citizen asked the FDA to order a black-box warning to highlight the concern, plus a letter to doctors.

The agency also should require a consumer-friendly guide explaining the risks that would be handed out by doctors when the drug is injected, the group said."These significantly improved warnings to doctors and patients would increase the likelihood of earlier medical intervention when symptoms of adverse reactions to botulinum toxin first appear, and could prevent more serious complications, including death," Public Citizen said in a petition to the FDA.The group said European regulators have warned physicians to watch for signs of botulinum toxin complications, most recently in March 2007.
Posted by Unknown at 10:47 AM