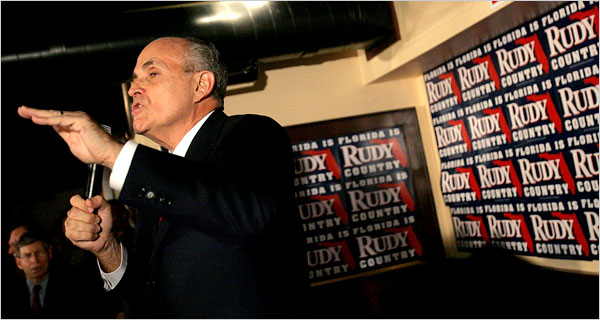 Rudolph W. Giuliani campaigned on Wednesday in Pensacola, Fla. He has gambled his time and money on winning the Republican primary in Florida on Jan. 29, at the expense of earlier races.

For months, the Republican establishment in New York and New Jersey marched nearly in lock step behind Rudolph W. Giuliani, the former hometown mayor they were confident would become their party’s nominee for president.

A Sharp Drop in the Polls for Giuliani

But as Mr. Giuliani has plummeted from first to fourth — or worse — in some national polls, as he finished near the bottom of the pack in the nation’s earliest primaries, and as his lead evaporated even in Florida, the state on which he has gambled the most time and money, those Republican leaders are verging toward a grim new consensus:

If Mr. Giuliani loses in the Florida primary on Jan. 29, they say, he may even have trouble defeating the rivals who are encroaching on his own backyard.

“It’s pretty certain that he has to win Florida,” said Guy V. Molinari, the former Staten Island borough president, who is co-chairman of Mr. Giuliani’s campaign in New York.

Those supporters say they are confident that if Mr. Giuliani carries Florida or runs a very close second, he will remain the odds-on favorite to claim virtually all of the delegates from the New York, New Jersey and Connecticut primaries on Feb. 5, when Republicans in 22 states vote.

But if Mr. Giuliani is relegated to a distant second or worse in Florida, even some of his supporters acknowledge that New York’s primary one week later would most likely be up for grabs, with Senator John McCain of Arizona and former Gov. Mitt Romney of Massachusetts being Mr. Giuliani’s strongest rivals. Like Mr. Giuliani, both are fielding full delegate slates in all 29 of the state’s Congressional districts.

“If he carries Florida, he carries New York,” said Fred Siegel, a Cooper Union historian who has served as an adviser to the former mayor and written a largely admiring biography of him. But winning Florida would require “a miraculous comeback,” he said, adding: “I wouldn’t bet on it.”

With 101 delegates from New York, 52 from New Jersey and 30 from Connecticut, the region accounts for about 15 percent of the magic number needed for the Republican nomination. All three are winner-take-all contests.

Mr. Giuliani’s precipitous decline in national and state polls in recent weeks has prompted many of his leading supporters in the metropolitan area to raise questions about his strategy of largely ignoring early races in Iowa, New Hampshire and Michigan to focus on Florida. He received little news coverage during those primaries, then finished poorly in each.

“I think that a lot of what’s happening in general is the early campaigning in Iowa, New Hampshire and Michigan playing an active role, and the fact that Rudy chose not to compete,” said Guy F. Talarico, a Giuliani supporter who is the former chairman of the Republican Party in Bergen County, N.J. “People are focusing on that and saying, ‘When are we going to get in the game?’ ”

Still, once the campaign circles back to the metropolitan area, “I think he’s going to win New Jersey,” Mr. Talarico said.

A senior Republican strategist, who is allied with Mr. Giuliani and is working with Republican legislative candidates in New York, said Mr. Giuliani’s decision to circumvent the early primaries was a “big gamble” that for the moment looked in danger of failing.

“Who knows if it will work,” said the strategist, who spoke on condition of anonymity because he had not been authorized by the campaign to speak publicly. “But the danger is what you are seeing now. We’re obviously concerned.”

Mr. Giuliani’s poll numbers have declined in Florida even though he has invested heavily there. The former mayor spent almost $600,000 on television advertising in Florida between Dec. 8 and Jan. 6, second only to Mr. Romney, who spent $676,851, according to Campaign Media Analysis Group, a political advertising research firm.

Almost all of Mr. Giuliani’s spending came in the final 10 days of that period, when Mr. Romney stopped buying ads.

The race has also narrowed in New Jersey, according to a poll released this week by Monmouth University/Gannett. The poll showed Mr. McCain leading by 29 percent to Mr. Giuliani’s 25 percent, a difference that is within the poll’s margin of sampling error. In September, the same poll found Mr. Giuliani 32 percentage points ahead of his nearest rival, Mr. McCain.

On Wednesday, Mr. McCain vowed to compete hard in New York. “I’m going there a lot for money,” he said. “I ought to go there for votes.”

Nationally, a New York Times/CBS News poll released on Sunday found that Mr. Giuliani, who led the Republican field with 29 percent nationally in October and was tied with Mr. Huckabee at about 22 percent last month, had plummeted to 10 percent, behind Mr. McCain and Mr. Huckabee.

In New York, with its three million enrolled Republicans, polls indicate Mr. Giuliani’s edge was eroding even before the victories by Mr. Huckabee, Mr. McCain and Mr. Romney in Iowa, New Hampshire and Michigan, respectively. In October, Mr. Giuliani led his nearest opponent by a commanding 33-point margin. By last month, he was still ahead, but his lead had shrunk to 22 percentage points.

New public polls are expected to show the race has tightened even more, polling experts said.

“I have a feeling that the sag in Florida and the sag in New Jersey will probably be matched by a sag in New York,” said Maurice Carroll, director of the Quinnipiac Poll, which plans to release a new New York poll next week.

It is unclear what impact Mr. Giuliani’s weak poll numbers and poor primary finishes have had on his fund-raising, as new quarterly campaign spending reports will not be filed until the end of the month. But his campaign reported last week that some workers had given up their paychecks for the month to help save dwindling funds. The campaign reported having $7 million in cash on hand at the time.

There are also concerns among Giuliani supporters that if he does not gain momentum before Feb. 5, he will have to spend precious funds just to win New York, where advertising is particularly expensive.

Anthony V. Carbonetti, Mr. Giuliani’s senior political adviser, said on Wednesday: “Rudy has a long history of fighting for New York, and with his track record and the campaign team we’ve put together here, we’re going to win on Feb. 5.”

Mr. Giuliani has some clear advantages in the region. In addition to having more organizational support from Republican elected officials, he is counting on the fact that in New York and Connecticut, Italian-Americans constitute about one-fifth of the voters in Republican primaries.

But while his popularity soared after the World Trade Center attack, Mr. Giuliani is still reviled by some New Yorkers, including well-organized firefighters who blame him for communications failures on 9/11 and Republicans who have never forgiven him for endorsing a Democrat, Mario M. Cuomo, for governor against George E. Pataki in 1994. Mr. Pataki won.

Mr. Pataki said through a spokesman, David M. Catalfamo, on Wednesday that he was “continuing to evaluate all the candidates and will make an endorsement sometime in the future.”

But several people who worked in his administration, including his former counsel, Michael C. Finnegan, have made their allegiances clear: They are running as McCain delegates.