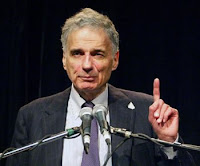 MONTREAL (Reuters) - Consumer advocate Ralph Nader said on Monday he will decide soon on whether to make a another bid for the White House in 2008, eight years after playing a key role as a third party presidential candidate.
"I'll decide in about a month," he said in an interview broadcast on CBC Radio's Daybreak show in Montreal.

"What I'm deciding on right now is whether we can get enough volunteers, enough financial resources to overcome the huge ballot access obstacles, which you don't experience here in Canada, but which are the worst in the Western world in the United States," said Nader, who will turn 74 on February 27.

Nader, who made his name as a consumer crusader during decades of battling corporations on matters from car to food safety, ran for president as an independent in 2004 and as the Green Party candidate in 2000.
Critics say he siphoned away enough votes from then Democratic Vice President Al Gore in the 2000 campaign -- especially in Florida -- to help Republican George W. Bush to win the White House.
(Reporting by Robert Melnbardis, editing by David Wiessler)
Posted by Unknown at 4:33 AM