ANOTHER YEAR WITHOUT A HOME 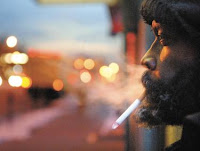 One man's struggle to survive on Broadway (The Riverdale Press)
Chances are you have seen Kenneth Porter ambling along Broadway. You may have given him some spare change from your pocket or - more likely - averted your eyes to the ground, picked up your pace and pretended you didn't hear his pleas.
Maybe you didn't notice him at all.
But he's there. Every day.
"I've been here for 10 years, everybody knows me up and down this bad boy," Mr. Porter said on a recent chilly afternoon outside Riverdale Market, just north of the West 242nd Street subway stop. He refuses to go elsewhere. "I don't know if there is a place better than Riverdale … can't be. I don't know, at least I ain't seen none."
Mr. Porter doesn't have an official residence, but Broadway is his home - more specifically the sidewalks outside Riverdale Market and the Short Stop Café, under the elevated train tracks, where he begs for change and food.
Although he was reluctant to speak of his past, the 54-year-old did say he was once employed as a factory worker at Phillip Morris in Richmond, Va., where he grew up.
At the age of 26, he suffered a stroke, which left him partially disabled. He walks with a slight limp, and he said he's unable to write well. His speech is also a little slurred.
"I can't run and I can't do the normal things that kids can do like run because I had the stroke," he said.
The tall, bearded man, who wears a black coat he received from the 50th Precinct, spends most of his day alone. At night, he opts to sleep on the subway. He shuns homeless shelters.
"The shelter keeps you cooped up. You get your curfew, you got to be in at 10 o'clock like you're a little kid. I ain't set for that," he said. "Cause when you were small your mom, your parents tell you gotta do this, you gotta do that. Okay, but now you're grown you don't need no curfew to tell you when to come in or whenever."
While some may see his life as a struggle, Mr. Porter said he is grateful for each day.
"Thank God I get up in the morning to see another day cause most people don't see another day," he said. "…He could have taken me when I was a little kid, he could have snapped my life away. He let me [stay] this far. Hopefully he let me [stay] a little further."
Posted by Unknown at 4:24 AM