NYC COPS AND FIREMEN DUKE IT OUT 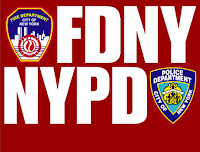 Two off-duty Staten Island firefighters got into a drunken punch-up in a Stapleton bar with a group of uniformed cops trying to enforce the drinking age, police allege.
Firefighters, Jason Kipp, 28, of Rosebank, and John Cooper, 25, of Annadale, were patronizing Beer Goggles on Van Duzer Street -- a bar that's been in police crosshairs for several months -- early Friday morning, according to authorities.

At about 1 a.m., an NYPD sergeant and three officers walked in for an unannounced inspection and started handing out summonses for underage drinking. When they ordered the bar closed for the night, Kipp and Cooper got belligerent, police sources said.
Court papers accuse Kipp of punching one officer in the side, while Cooper repeatedly punched another officer in the back and shoulder.
All four cops ended up with a variety of sprains, scrapes and bruises, and one sustained a broken right hand, sources allege.

Kipp and Cooper, who were both described in police reports as "intoxicated," were charged with second-degree and third-degree assault, resisting arrest and disorderly conduct.
The duo, who are both assigned to Engine Co. 247, in the Bushwick section of Brooklyn, will be suspended without pay, an FDNY spokesman said.
Cooper declined comment when reached at his Eagan Avenue home. Kipp did not come to the door at his Chestnut Avenue home.

Kipp's landlord, John Colon, referred to his tenant as a "nice guy" who takes physical fitness seriously. "I've never had a problem with him," Colon said. "I never saw him drunk."
Both men were released on their own recognizance Friday, and are scheduled to return to court Jan. 30, said William J. Smith, a spokesman for District Attorney Daniel Donovan.
Police also issued five summonses to Beer Goggles -- two for disorderly premises, two for underage consumption of alcohol and one for sale of liquor to a minor, a police source said.
It's not the first time the bar has gotten into hot water over underage drinking -- the bar faces suspension proceedings by the State Liquor Authority over an alleged April 27, 2007 underage drinking violation.

Bar owner Chris Shaffer, said he's pleaded "not guilty" to that violation, and that he didn't think he was issued anything more than a noise violation after Friday's incident.
When the cops entered the bar he went outside, and didn't see the entire situation unfold.
Beer Goggles, which state records show first started serving alcohol in 2004, has been under increased police scrutiny in recent months.

Neighbors regularly complain about loud, drunken teens fouling their lawns and damaging their property, and early Thanksgiving morning last year, homeowners on nearby William Street woke up to find the side mirrors of their cars smashed.
"You never know what night it's going to be," said William Street resident Michael Bellamy. "They were at it last night. The kids are out there, the boys and the girls. The girls are just as bad.... They all come here to get drunk."

Sean Sweeney, chairman of Community Board 1, said he's disheartened about recent incidents at the bar, considering the owner's "been forewarned."
Shaffer countered that he makes every effort to prevent underage drinking, ordering his bartenders to card customers, and taking photographs of every ID shown to get into a party at the bar.

Shaffer, who also owns Bottomley's Tavern further along Van Duzer, added that he doesn't think he's been getting undue scrutiny from police.
He pointed out that he paid to repair all of the side mirrors smashed on William Street, even though he didn't know for sure that one of his patrons caused the damage.
"I wanted to keep the peace with my neighbors, so I felt like I was doing the right thing, socially and morally," he said. "I think that me paying for the mirrors shows that I am trying to be responsible. It's difficult owning a bar in a residential neighborhood, but I'm doing the best that I can."
Posted by Unknown at 4:02 AM