NYC FIREFIGHTERS GET BURNED IN SAVANNAH 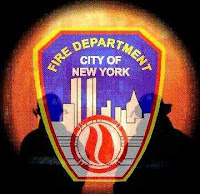 Committee said there was too much drinking and other rule breaking.

When firefighters from New York marched in previous St. Patrick's Day Parades in Savannah, they carried a banner proclaiming "New York City Firefighters Love Savannah."
Will they still love the city now that they've been kicked out of the parade for throwing beads and drinking while marching?
"This gives the appearance that Savannah doesn't love them," said Jim Grismer, chairman of Savannah Friends of Firefighters.

Parade rules forbid drinking while marching or throwing items to the crowd.
Before 2005, individual firefighters had been coming to the Savannah parade for years and sometimes just jumping into the line.
After seeing this, Grismer, a retired firefighter with two sons in the New York Fire Department, applied for a specific spot for firefighters in 2005. He has been hosting firefighters for the parade since 2003 and throws an annual reception for them.

He told those who were in the group at the beginning of the parade all the rules, he said.
"The concern I had is the parade steps off and people join in and I don't want that," he said. "The guys who step off the sidewalk could have a six-pack under their arm."
A separate application for the department's pipe and drum corps was approved. But Forbes said any firefighters who come to Savannah won't be able to fall behind the corps.
"It seems like overreaction" Grismer said. "They never gave us a chance to correct perceived problems."

But Forbes said he spoked to Grismer before the 2007 parade.
"You assured us that we would not encounter that problem during last year's parade," Forbes wrote in a letter to Grismer dated Jan. 4. "We, again, encountered that problem."
Forbes said some firefighters even cursed parade officials who tried to intervene last year.
Committee members have flexed their muscle before to mold the parade according to their vision.

In 2002, the committee asked the Alee Temple Shriners to cut the number of units from 21 to 15 to make the parade shorter.
The Shriners bailed but came back in 2005 with fewer vehicles.
Because of the Martin Luther King Jr. holiday Monday, representatives from the New York Fire Department were unavailable for comment. But Grismer said firefighters will come down for the parade.
And, next year, he can re-apply.
Posted by Unknown at 4:20 AM