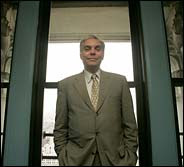 NYC Official Fined for Conflict of Interest
NEW YORK (AP) -- A former city official and political power broker has been fined $15,000 by a conflicts of interest panel for misusing city resources and staff for work related to his private law practice.
Stanley Schlein, the former chairman of the New York City Civil Service Commission, acknowledged that he had asked staffers to perform legal work related to his private clients, all while on city time and using a city-owned computer, telephone, and copy and fax machines.
In a settlement with the Conflicts of Interest Board signed last month and released Wednesday, Schlein admitted to the allegations and agreed to pay the $15,000 fine.
A veteran of Bronx Democratic politics, Schlein also acknowledged that he used his city phone for personal matters, totaling more than 2,000 calls from January 2004 to September 2006.
Schlein acknowledged that he had violated the city's conflict of interest law that prohibits a public servant from using city resources for non-city purposes and bans employees from using their city positions for financial gain or other personal advantage.
The Civil Service Commission acts as a quasi-judicial body for disciplinary actions and appeals from decisions made by the city's administrative services department.
Schlein was commissioner from 1990 to 2002, and then served as chairman until 2006.
More news from the Bronx...
Posted by Unknown at 1:44 PM