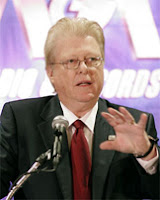 Fox News' John Gibson found a way to outdo MSNBC's Courtney Hazlett for the most inappropriate comment on Heath Ledger's death. ThinkProgress reports that, on his radio show yesterday (which opened with funeral music), Gibson called Ledger a "weirdo" with a "serious drug problem." Making fun of the famous "I wish I knew how to quit you" line from "Brokeback Mountain," Gibson said of his death, "Well, he found out how to quit you."

This is not Gibson's first time making inappropriate comments in the wake of tragedy. In July 2005, just one day before the 7/7 terrorist bombings in London, Gibson said that "the International Olympic Committee missed a golden opportunity....If they had picked France instead of London to hold the Olympics, it would have been the one time we could look forward to where we didn't worry about terrorism. They'd blow up Paris, and who cares?" The next day, after the London bombings, Gibson repeated the remarks.
To hear the must-listen audio of John Gibson mocking Heath Ledger's death, visit ThinkProgress.
Get Media Alerts
Email:
Posted by Unknown at 4:11 AM