CASHING IN ON CHECKING OUT 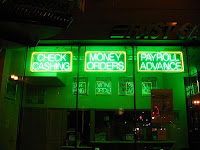 NEW YORK (AP) - Two men wheeled a dead man through the streets in an office chair to a check-cashing store and tried to cash his Social Security check before being arrested on fraud charges, police said.
David J. Dalaia and James O'Hare pushed Virgilio Cintron's body from the Manhattan apartment that O'Hare and Cintron shared to Pay-O-Matic, about a block away, spokesman Paul Browne said witnesses told police.
"The witnesses saw the two pushing the chair with Cintron flopping from side to side and the two individuals propping him up and keeping him from flopping from side to side," Browne said.
The men left Cintron's body outside the store, went inside and tried to cash his $355 check, Browne said. The store's clerk, who knew Cintron, asked the men where he was, and O'Hare told the clerk they would go and get him, Browne said.
A police detective who was having lunch at a restaurant next to the check-cashing store noticed a crowd forming around Cintron's body, and "it's immediately apparent to him that Cintron is dead," Browne said.
The detective called uniformed New York Police Department officers at a nearby precinct. Emergency medical technicians arrived as O'Hare and Dalaia were preparing to wheel Cintron's body into the check-cashing store, Browne said. Police arrested Dalaia and O'Hare there, he said.
Cintron's body was taken to a hospital morgue. The medical examiner's office told police it appeared Cintron, 66, had died of natural causes within the previous 24 hours, Browne said.
"He was deceased in the apartment when he was removed by these two," Browne said.
Dalaia and O'Hare, both 65, were being held by police and faced check fraud charges, Browne said.
A call to a telephone number listed for Cintron at the apartment he shared with O'Hare went unanswered Tuesday evening. Police said they didn't have an address for Dalaia or attorney information for him or O'Hare.
Posted by Unknown at 4:01 AM

My name is Angie Patterson I was browsing internet and found your blog. The author did a great job. I will subscribe to your RSS feeds. Thank you for your contribution. I am a web designer myself. And here some examples of the websites that I designed for payday loan payday loans in canada company.

Thanks For blog with usable informations.