INTEL FAILS TO DELIVER THE GOODS 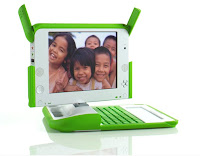 A program that could have made a significant difference to poor children around the world has called it quits. After much fan fare and free publicity, Intel has backed out of it's much touted "one laptop per child" program. One can only wonder where the fault lies. One should also wonder if they were sincere from the beginning. In an effort that could have bridged a gap between enlightenment and anti-Americanism, once again, a US corporation has failed.
Intel quits One Laptop Per Child program
By MAY WONG, AP Technology Writer Fri Jan 4, 12:59 AM ET
SAN JOSE, Calif. - Citing disagreements with the organization, Intel Corp. said Thursday it has abandoned the One Laptop Per Child program, dealing a big blow to the ambitious project seeking to bring millions of low-cost laptops to children in developing countries.

The fallout ends a long-simmering spat that began even before the Santa Clara-based chipmaker joined the OLPC board in July, agreeing to contribute money and technical expertise. It also comes only a few days before the Consumer Electronics Show in Las Vegas, where a prototype of an OLPC-designed laptop using an Intel chip was slated to debut.
Intel decided to quit the nonprofit project and the OLPC board because the two reached a "philosophical impasse," Intel spokesman Chuck Mulloy said. Meanwhile, Intel will continue with its own inexpensive laptop design called the Classmate, which it is marketing in some of the same emerging markets OLPC has targeted.
Both sides shared the objective of providing children around the world with the use of new technology, "but OLPC had asked Intel to end our support for non-OLPC platforms, including the Classmate PC, and to focus on the OLPC platform exclusively," Mulloy said. "At the end of the day, we decided we couldn't accommodate that request."
A spokesman for OLPC did not immediately return a request for comment.
The One Laptop program was founded in 2005 by Nicholas Negroponte, former Media Lab director at the Massachusetts Institute of Technology. The original concept was to offer a "$100 laptop," but the green-and-white low-power "XO" computer now costs $188. It runs on a Linux operating system and a chip made by Intel rival Advanced Micro Devices Inc.
Negroponte told The Associated Press last fall that until OLPC had a machine using an Intel chip, he could understand why Intel wouldn't want to push an AMD machine to customers.
Mulloy said the use of AMD chips in the OLPC machines had nothing to do with Intel's decision to withdraw.
Intel believed all along that there is a need for multiple alternatives to meet the needs of children in poor countries, he said.
"It's unfortunate this happened, but at some point, you have to make a tough decision," he said.
Posted by Unknown at 7:20 PM