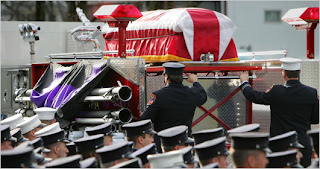 Thousands of firefighters, Fire Academy recruits and other mourners gathered outside the Church of St. Clare in the Great Kills neighborhood of Staten Island this morning to pay their final respects to Lt. John H. Martinson, who was killed on Thursday as he fought a fire that swept through a 25-story apartment building in Crown Heights, Brooklyn.
Included in the group of mourners were the politicians. City Council Speaker Christine Quinn and City Councilwoman, Leticia James. Neither of which knew Martinson personally. It was a grand funeral foto-op for the politicians. Walking slowly past the press camera platform angling for that brief few minutes of face time, they performed. Solemn faced yet exchanging cheek kisses with the firemen, they did what they do best.....show up.
The concept of fireman chic developed shortly after 9-11. It was politically savvy to align oneself with firemen. Prior to the September debacle, the blue collar heroes were dismissed as inconsequential low wage muscle men. Wage increases were in dispute and though always recognized as valuable workers, the level of respect accorded to them by politicos was sorely wanting.
St. Clare's Church was full to capacity today. Many fellow firefighters stood outside by the hundreds.
There were no seats for them. Inside, Christine and Leticia were afforded a ringside seat. And as the choir sang and the family cried, they pondered their political futures.
Posted by Unknown at 6:42 PM