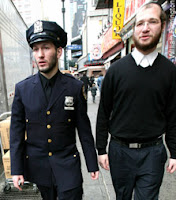 The increasingly diverse NYPD wants to get a little more uniform: Cops have been told to say goodbye to their goatees, chin strap beards and designer hair affectations more suitable for, well, designers. Police officers are allowed to have mustaches -- the most notable wearer is Chief of Department Joe Esposito -- and undercovers can pretty much do whatever they want when it comes to facial hair.

The department also allows officers to grow beards if they suffer from Pseudofolliculitis barbae, a dermatological condition better known as PFB that is common among black men and afflicts those who shave with rashes and scarring, mostly on and under their chins, as well as on their cheeks and necks. But according to a recent memo circulated throughout the department, officers with such clearance do not have carte blanche to let their hair down, so to speak. In other words, no goatees, no chin strap beards (think Barry White), and no "designer beards," the kind Mike Piazza used to wear when he played for the Mets.

The memo, dated Jan. 8 and issued by Police Commissioner Ray Kelly, details an NYPD Patrol Guide revision that sources said is a combination of two factors: recently-appointed Chief of Patrol Robert Giannelli is a stickler for appearances, and both Giannelli and other police officials have seen in the past year or so a less-than-strict adherence to the rules of appearance.

The NYPD may be trying to foster better community relations, but it's not about to get too warm and fuzzy, according to police sources. In other words, the NYPD doesn't do Casual Friday. And that, according to one law and police science professor, is exactly how it should be. "Appearance is so important in any kind of authoritative role,'" said Jim Curran, who was a cop in the 1960s and now teaches at the John Jay College of Criminal Justice. "Police officers should be clean. They should look nice. The Patrol Guide emphasizes that for a reason.'"
Posted by Unknown at 3:51 AM