Bill de Blasio: A Progressive Mayor for ALL New Yorkers

Bill De Blasio I believe has the best chance among real progressives to win the mayoralty and to take New York City in a different, more hopeful direction. It’s time for New Yorkers to take back THEIR city from those who have used it to enrich themselves at our expense. Bill de Blasio can help us put the Statue of Liberty back on its pedestal in New York politics. Read more about him and this crucial election.

Video by Rafael Martínez Alequín
Posted by Unknown at 4:26 PM No comments:

Bloomberg Shares a Few Secrets of His Success: Be Early, Stay Late and Hold It In

A tossed-off remark on efficiency by Mayor Michael R. Bloomberg — don’t go to the bathroom so much — stirred no shortage of mockery.
Posted by Unknown at 10:17 AM No comments:

Posted by Unknown at 9:47 AM No comments:

On the steps of city hall Council Members Brad Lander, Dem. Brooklyn and Margaret Chin, Dem. Manhattan, along with Peter H. Kostmayer, (CEO, CCNYS) , urged all New Yorkers to support their legislation to be introduced this Thursday (8/22/13) to cut plastic bag use in the city by charging a fee to most New Yorkers.

The fee is a 10 cents for each plastic bag. A Bonanza for the big chain of Supermarket
Video by Rafael Martínez Alequín
Posted by Unknown at 9:14 PM No comments:

New Yorkers want to live in a safe city where all residents are treated with dignity and respect, and where the New York City Police Department under mayor Bloomberg is not above the law. Support Intro #1079 and1080. The City Council must override mayor Bloomberg (The Devil) on their next Council meeting on Thursday, August 22, 2013

The Bane of Four Mayors

The Bane of Four Mayors 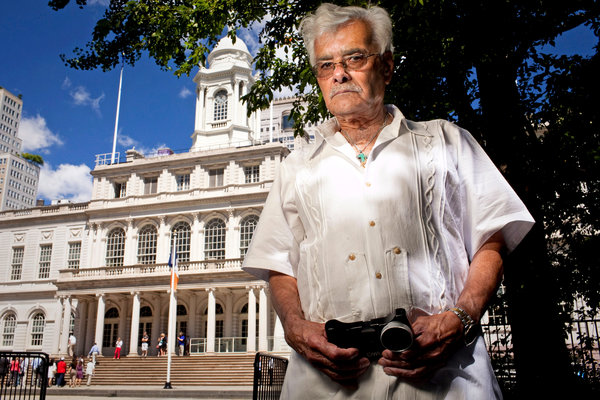 Dave Sanders for The New York Times
Rafael Martínez Alequin has spent decades reporting, or trying to, from City Hall.

Mr. Martínez Alequin, 80, was showing off a drawing he had commissioned and posted on his blog, Your Free Press, that portrayed the mayor with devil’s horns.
It elicited some polite smiles. A reporter could be heard discussing Mr. Martínez Alequin’s “cringe-worthy” questions.
This slight man with fine features and wavy silver hair — he was dressed on Monday in slacks and a white guayabera shirt — has been a fixture of the City Hall press corps for 30 years. He is a familiar sight in the scrum of reporters around a politician or, as he was on Monday, in the front of the press gallery in the Blue Room.
Hanging just outside the room were framed likenesses of Mayors Edward I. Koch, David N. Dinkins and Rudolph W. Giuliani, all of whom Mr. Martínez Alequin has tormented with distracting, rambling and provocative questions. Mr. Martínez Alequin says he has a hard time getting Mr. Bloomberg’s attention.
Now on Monday, the mayor appeared, with the police commissioner, Raymond W. Kelly, to speak against a federal judge’s decision that called the Police Department’s stop-and-frisk tactics a violation of the constitutional rights of minorities.
Mr. Martínez Alequin, who considers himself a champion for the poor and for black and Latino residents, raised his hand almost as a formality as the mayor took questions afterward. Mr. Bloomberg bypassed him.
“You see that? He ignored my question,” Mr. Martínez Alequin said victoriously afterward. “It’s good for my ego that the mayor of New York, one of the richest and most powerful people in the world, is afraid of me.”
As Mr. Kelly exited, he gave Mr. Martínez Alequin an enthusiastic handshake and a cheerful ribbing — “You were terrific!” — and they laughed.
In 2007, the Police Department refused to renew working press credentials for Mr. Martínez Alequin. Mayoral aides then banned him from Blue Room news conferences and stopped sending him the mayor’s daily schedule, he said. The city relented only after Mr. Martínez Alequin filed a federal lawsuit and received support from a group of black and Latino members of the City Council.
At the time, police officials said Mr. Martínez Alequin did not meet the criteria for a press pass because he was a blogger who did not need to cross police lines at breaking news locations. On Thursday, a spokesman for Mr. Bloomberg, Marc La Vorgna, said the action in 2007 showed the difficulty of determining exactly who warrants a press pass, “because anyone with a Twitter handle can break news at this point.”
Without mentioning Mr. Martínez Alequin by name, Mr. La Vorgna wrote in an e-mail, “If you have no employer, no editors and no readers, are you a reporter?”
Mr. Martínez Alequin said he no longer has a desk in the press room, after several reporters complained to officials about him. Now he roams City Hall looking for additions to his blog, usually video posts.
Of other reporters, he said: “They don’t like me because I don’t kiss up to anyone.”
Mr. Martínez Alequin, a resident of the Amalgamated Housing Cooperative in the Bronx, lives on Social Security checks and the modest savings he amassed with his wife, Margarita, who died in 2000.
Mr. Martínez Alequin said he grew up in Maricao, Puerto Rico, moved to New York City at age 19 and began to learn English partly from watching Jerry Lewis movies. He began political and civil rights activism, served in the Army during the Korean War, and later protested the Vietnam War and ran for Congress while attending college in upstate New York.
His journalism career began in 1983, when he started an alternative tabloid called The Brooklyn Free Press, a one-man operation that was critical of city officials. It became the New York City Free Press before giving way in 2007 to his blog.
Mr. Martínez Alequin says the need to press politicians about issues that affect the poor outweighs concerns and complaints about his antagonistic antics, pushy manner and off-topic questions.
“I’m here because someone has to report about what will affect the rights of blacks and Latinos,” said Mr. Martínez Alequin, who said he first supported the mayor but soured on him because “he thinks he can buy anything.” The mayor treats him even worse than Mr. Giuliani did, he said, which is saying something. In 2000, Mr. Giuliani, in front of a group of schoolchildren, called Mr. Martínez Alequin a “jerk” and an “embarrassment.”
“At least Rudy took my questions, because he liked an argument,” Mr. Martínez Alequin said.
“Giuliani had a heart, but Bloomberg has cold blood — he acts like a king,” he said.
E-mail: character@nytimes.com
This article has been revised to reflect the following correction:
Correction: August 16, 2013
An earlier version of this article referred incorrectly to how often Mayor Bloomberg has called on Mr. Martínez Alequin. He has been called on in recent years.
Posted by Unknown at 6:04 PM 1 comment: