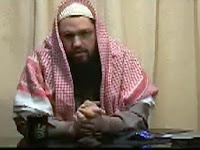 Adam Gadahn, formerly known as Adam Pearlman, is up to it again. Blame it on too much California sun or an avocado overdose. Now he is calling upon all good mujahdeen to "take out" President Bush.

American Al Qaeda leader Adam Gadahn told his followers to welcome Bush "with bombs and traps" upon his upcoming visit to the Middle East this week.

"The occupied territories are awaiting their first visit by the crusader Bush and the mujahideen are also waiting for him," said Gadahn, a California native and now an Al Qaeda spokesman.
Gadahn is the star of the latest al Qaeda propaganda video to be posted online by the group's media wing, As Sahab.
In his newest dramatic gesture, Gadahn tore up his U.S. passport in protest of the imprisonment of fellow al Qaeda followers Abu Zubaydah, John Walker Lindh and Sheikh Omar Abdul Rahman.
"I don't need it to travel anyway," he said afterwards.
Gadahn made reference to November's Annapolis conference of Middle Eastern leaders, saying it was a gathering of Bush's "loyal puppets." He said the United States has been "unmistakably defeated" in Iraq in Afghanistan and has lost the battle for hearts and minds "in spectacular fashion."
"They're about to hand the whole mess over to local proxies who, if they haven't already, shall soon rue the day they sold their souls and religion to the American devil," Gadahn said.
Gadahn also made reference to Pakistan, but didn't mention the assassination of opposition leader Benazir Bhutto, indicating the video may have been made before her death. Rather, he said Al Qaeda "continues to strike the ruling regime" there as it fights against President Pervez Musharraf's "farce of elections."
American Al Qaeda Leader To Bush: 'We Will Be Waiting For You' 12Next
Posted by Unknown at 7:39 PM