MAYOR 9-11 LIMPS ACROSS THE FINISH LINE 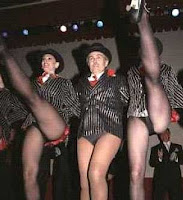 ORLANDO, Fla. (AP) - Rudy Giuliani, who bet his presidential hopes on Florida only to come in third, prepared to quit the race Tuesday and endorse his friendliest rival, John McCain.
The former New York mayor stopped short of announcing he was stepping down, but delivered a valedictory speech that was more farewell than fight-on.

Giuliani finished a distant third to winner McCain and second-place finisher Mitt Romney. Republican officials said Giuliani would endorse McCain on Wednesday in California. The officials spoke on condition of anonymity in advance of the public announcement.
"The responsibility of leadership doesn't end with a single campaign, it goes on and you continue to fight for it," Giuliani said, as supporters with tight smiles crowded behind him. "We ran a campaign that was uplifting."

Asked directly if he was dropping out of the race, Giuliani said only: "I'm going to California."
Republican presidential candidates are scheduled to debate in Simi Valley Wednesday night.
Tuesday's result was a remarkable collapse for Giuliani. Last year, he occupied the top of national polls and seemed destined to turn conventional wisdom on end by running as a moderate Republican who supported abortion rights, gay rights and gun control.
"Elections are about fighting for a cause larger than ourselves," he said at one point, echoing one of McCain's most popular refrains.

The results seriously decimated Giuliani's unconventional strategy, which relied heavily on Florida to launch him into the coast-to-coast Feb. 5 nominating contests.
He largely bypassed the early voting states, figuring that the early states would produce multiple winners and no front-runner.

But Florida proved to be less than hospitable. The state's top two Republicans - Sen. Mel Martinez and Gov. Charlie Crist - endorsed McCain. And Giuliani, who once led in state polls, saw his support swiftly erode.
After seven contests, Giuliani had just one delegate and four sixth-place finishes. His third-place showing in Florida was his best. He finished fourth in New Hampshire.
Giuliani's bid for the nomination was based on his leadership. The only question was how many voters would follow.

His stalwart performance as New York mayor in the tense days after the Sept. 11, 2001 terrorist attacks earned him national magazine covers, international accolades and widespread praise. Yet, Giuliani was always a Republican anomaly - a moderate-to-liberal New Yorker who backed abortion rights, gay rights and gun control in a party dominated by Southern conservatives.
And even though several of his rivals were divorced and remarried, none had the dissolution of their second marriage and trysts with current wife Judith Nathan attract as much attention.
In the early days of the presidential campaign, Giuliani's mayoral record and familiar name propelled him to the lead in the polls, but voters admitted they had lots to learn about him and his positions on the issues.
Posted by Unknown at 4:09 AM

At least he has nice legs