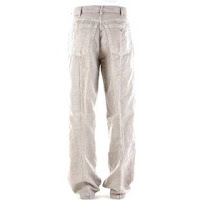 HERE’S one popular vision for saving the planet: Roll out from under the sumptuous hemp-fiber sheets on your bed in the morning and pull on a pair of $245 organic cotton Levi’s and an Armani biodegradable knit shirt.

Mark Elias/Bloomberg News
WORLDLY GOODS The 438-horsepower Lexus luxury hybrid sedan.
Stroll from the bedroom in your eco-McMansion, with its photovoltaic solar panels, into the kitchen remodeled with reclaimed lumber. Enter the three-car garage lighted by energy-sipping fluorescent bulbs and slip behind the wheel of your $104,000 Lexus hybrid.
Drive to the airport, where you settle in for an 8,000-mile flight— careful to buy carbon offsets beforehand — and spend a week driving golf balls made from compacted fish food at an eco-resort in the Maldives.
That vision of an eco-sensitive life as a series of choices about what to buy appeals to millions of consumers and arguably defines the current environmental movement as equal parts concern for the earth and for making a stylish statement.
Some 35 million Americans regularly buy products that claim to be earth-friendly, according to one report, everything from organic beeswax lipstick from the west Zambian rain forest to Toyota Priuses. With baby steps, more and more shoppers browse among the 60,000 products available under Home Depot’s new Eco Options program.
Such choices are rendered fashionable as celebrities worried about global warming appear on the cover of Vanity Fair’s “green issue,” and pop stars like Kelly Clarkson and Lenny Kravitz prepare to be headline acts on July 7 at the Live Earth concerts at sites around the world.
Consumers have embraced living green, and for the most part the mainstream green movement has embraced green consumerism. But even at this moment of high visibility and impact for environmental activists, a splinter wing of the movement has begun to critique what it sometimes calls “light greens.”
Critics question the notion that we can avert global warming by buying so-called earth-friendly products, from clothing and cars to homes and vacations, when the cumulative effect of our consumption remains enormous and hazardous.
“There is a very common mind-set right now which holds that all that we’re going to need to do to avert the large-scale planetary catastrophes upon us is make slightly different shopping decisions,” said Alex Steffen, the executive editor of Worldchanging.com, a Web site devoted to sustainability issues.
The genuine solution, he and other critics say, is to significantly reduce one’s consumption of goods and resources. It’s not enough to build a vacation home of recycled lumber; the real way to reduce one’s carbon footprint is to only own one home.
Buying a hybrid car won’t help if it’s the aforementioned Lexus, the luxury LS 600h L model, which gets 22 miles to the gallon on the highway; the Toyota Yaris ($11,000) gets 40 highway miles a gallon with a standard gasoline engine.
It’s as though the millions of people whom environmentalists have successfully prodded to be concerned about climate change are experiencing a SnackWell’s moment: confronted with a box of fat-free devil’s food chocolate cookies, which seem deliciously guilt-free, they consume the entire box, avoiding any fats but loading up on calories.
The issue of green shopping is highlighting a division in the environmental movement: “the old-school environmentalism of self-abnegation versus this camp of buying your way into heaven,” said Chip Giller, the founder of Grist.org, an online environmental blog that claims a monthly readership of 800,000. “Over even the last couple of months, there is more concern growing within the traditional camp about the Cosmo-izing of the green movement — ‘55 great ways to look eco-sexy,’ ” he said. “Among traditional greens, there is concern that too much of the population thinks there’s an easy way out.”
The criticisms have appeared quietly in some environmental publications and on the Web.
GEORGE BLACK, an editor and a columnist at OnEarth, a quarterly journal of the Natural Resources Defense Council, recently summed up the explosion of high-style green consumer items and articles of the sort that proclaim “green is the new black,” that is, a fashion trend, as “eco-narcissism.”
Paul Hawken, an author and longtime environmental activist, said the current boom in earth-friendly products offers a false promise. “Green consumerism is an oxymoronic phrase,” he said. He blamed the news media and marketers for turning environmentalism into fashion and distracting from serious issues.
“We turn toward the consumption part because that’s where the money is,” Mr. Hawken said. “We tend not to look at the ‘less’ part. So you get these anomalies like 10,000-foot ‘green’ homes being built by a hedge fund manager in Aspen. Or ‘green’ fashion shows. Fashion is the deliberate inculcation of obsolescence.”
He added: “The fruit at Whole Foods in winter, flown in from Chile on a 747 — it’s a complete joke. The idea that we should have raspberries in January, it doesn’t matter if they’re organic. It’s diabolically stupid.”
1
2 Next Page »
Posted by Unknown at 4:41 PM