HOY VAY: A WEDDING MADE IN THE CORPORATE BOARD ROOM 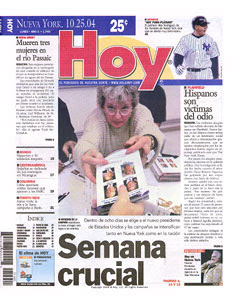 The same day that ImpreMedia and the Chicago based Tribune Company, announced the acquisition of the local Spanish newspaper Hoy to be part of Eldiario/La Prensa, 30 Hoy employees were laid-off. It looks like the same fate that was felt by the staff of La Prensa over 30-years ago.

Over thirty-years ago the owners of La Prensa were facing a struggle similar to the one Hoy is facing today. A struggle to cover the cost of publishing their paper in NYC. There is not enough advertising revenue for two competing newspapers within the Spanish-speaking community. This is one of the concerns of Hoy parent organization, the Tribune Company. Hoy, was a strong competitor to El Diario/La Prensa, until the revelation that Hoy as well as it's sister publication, Long Island Newsday, provided false data regarding their circulation.

El Diario, absorbed La Prensa, and slowly La Prensa disappeared as a publication. It only remains as a name on El Diario masthead, almost invisible. There is never anything wrong on any merge. Corporations see them as a way to increase the bottom line. Business is Business. The needs of the community they serve do not count.

It is akin to gentrification. Eminent domain is invoked. Property is brought and people are evicted. Badda bing, badda bang.
New York City is one of the largest Spanish speaking cities in this country. Unfortunately, as the population of Latinos grows here, and across the United States, non-Latinos own the Spanish press.

ImpreMedia, who now owns the newspapers serving the Latino community in the New York City metropolitan area (New Jersey Connecticut), is owned by a Canadian multi-media conglomerate. As long as non-Spanish business people own the Spanish communication media, there will be little empowerment for Latinos.

Let's be clear, we can’t blame the individuals chosen to be the managers for El Diario/LaPrensa. They are operating with limited resources. Therefore, they do not have the capital that the Anglo mainstream media has at their disposal. They have to depend on the wire services to cover stories dealing with the Latin American countries. But, there is no excuse, not to assign journalists to cover local stories.


There is no reporter as of now, assigned to cover events at City Hall. However, a source did inform Your Free Press that soon that a reporter would be assigned there. Whatever happens at both wings of New York’s City Hall is of immense importantance to our Latino community. A story written by a wire service reporter is picked up and translated into Spanish verbatim. A Latino covering the story would have more knowledge regarding the impact on the community.

In a telephone conversation, with Alex Gómez, spokesperson for ImperMedia, he states: "They will publish both newspapers, one free, (Hoy) and one paid subscription (El Diario/LaPrensa)." One has to be skeptical here. Impremedia has a history of "Buy up and throw out". If things do not work out, Hoy will merge with El Diario. And in the process, people will lose their jobs. Not because they are not capable. But because an Anglo conglomerate misunderstood it's product.
Posted by Unknown at 9:19 PM

The merger is unfortunate but newspaper sales have been declining in general. The Daily News and The Post are giving their newspapers away for free all the time on the streets of NYC. Latinos and other underserved communities need to take advantage of this time by sharing their issues, concerns, and ideas via the world wide web.

Colapin your best choice for replica handbags.
com, Our goal is to offer you the most complete, accurate, and useful information on purchasing Oris Fake Watch on the Internet.

I found this site using [url=http://google.com]google.com[/url] And i want to thank you for your work. You have done really very good site. Great work, great site! Thank you!

Women looking the shipping becoming as a replacement for men USA.Bona fide People.

Guys tell me that I am candy and innocent looking. I can declare you that it is horns holding up that annulation . I am a danged voluptuous mortal physically and inclination to test and play. I sweet being naked and will fillet down fitting nigh far which is why half the time I am plain on my webcam (or just back au naturel). I privation a bloke who is as open and high spirits loving as me. Don't be modest, I opportunity gesture fast.
Savvy here: [url=http://adultusadating.dateprettygirl.com/adult-singles-dating-hubbell-nebraska.html]adult singles dating hubbell nebraska[/url]

Women looking interchange as a checking to men USA.Inherited sex.

I am in my fresh 20's so if you are looking on some 18 or 19 year archaic chick to webcam chat with I'm not her. If you are looking instead of a frail to have some facetiously with that knows how to from horseplay and knows how to interest a guy then I am your girl. I am a tolerably plumb shooter so I am looking payment guys that won't act games and that enjoy doing all kinds of sexual things. I would relish to do some cam 2 cam compress if possible.
Duration Clear Girls: [url=http://adultusadating.dateprettygirl.com/gay-men-dating-site.html]gay men dating site[/url]

I found this site using [url=http://google.com]google.com[/url] And i want to thank you for your work. You have done really very good site. Great work, great site! Thank you!

We offer you budget and luxury hotels and apartments in Vienna.

Ready to grant you loans.

Apply online for a cash advance loan and receive your cash within hours.

to a site that is promising a personal loan, or a payday advance.

Besides not being able to make calls or place texts messages, whats the difference between the two. Can the iphone do other things the touch can not?

Sorry for my post .Where i can watch more info about?

What do you think?