THE MOUSE SELLS IT'S CHEESE 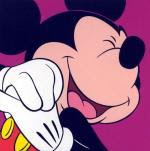 Disney May Sell ABC TV Stations, Caris Analyst Says (Update1)
By Andy Fixmer
Aug. 13 (Bloomberg) -- Walt Disney Co., the second-largest U.S. media company, may sell its 10 ABC television stations, fetching as much as $4.8 billion, said David Miller, an analyst at Caris & Co. who has covered the company since 2000.
``We have reason to believe that Disney is heavily considering the notion of putting its 10 owned and operated television stations up for sale,'' Miller wrote in a report today. He said in an interview the finding is his analysis and not from outside sources. Disney spokesman Jonathan Friedland called the report ``purely speculative'' and declined to comment.
Disney owns stations in cities including New York, Los Angeles and Chicago. A sale would depend on at least those outlets in the biggest markets remaining affiliated with Disney's ABC TV network, Miller said. ABC has broadcast agreements with about 231 TV stations in the U.S., he said.
``As long as the new owner keeps the ABC affiliations, that should be enough for Disney,'' Miller said. The analyst, who is in Los Angeles, rates the shares ``above average.''
The 10 outlets annually contribute about $440 million in earnings before interest, taxes, depreciation and amortization, according to Miller. Disney, based in Burbank, California, doesn't disclose the stations' sales and operating profit.
By selling the stations, Disney would exit the TV distribution business and become the only large, public U.S. media company to be completely focused on content, Miller said.
Disney fell 42 cents, or 1.3 percent, to $31.74 at 1:40 p.m. in New York Stock Exchange composite trading. The shares had dropped less than 1 percent this year before today.
ABC also owns stations in Philadelphia; San Francisco; Houston; Raleigh-Durham, North Carolina; Fresno, California; Flint, Michigan; and Toledo, Ohio, according to a Disney regulatory filing.
To contact the reporter on this story: Andy Fixmer in Los Angeles at afixmer@bloomberg.net Last Updated: August 13, 2008 13:54 EDT
Posted by Unknown at 3:16 PM