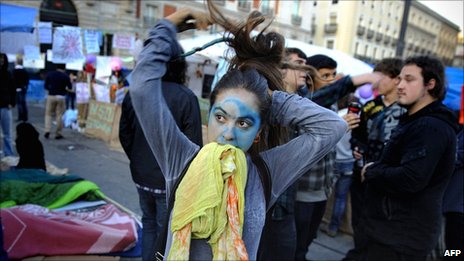 Tens of thousands of Spanish protesters are continuing to defy a government ban by camping out overnight in a square in the capital, Madrid.

The protesters are angry with the government's economic policies and have occupied the Puerta del Sol area of the city for the past week.

Here, readers in Spain describe the scene at the protests and their reaction to the demonstrations.

This is an historic moment. Thousands of people have been camping in Sol since last Sunday with no flags or affiliation to any party.

These protests are not only about unemployment. They are about the unfair political situation that exists in Spain”

Young people, old people, families, it does not matter.

Everything is organised. There are tents to place your suggestions to the movement.

There are tents with food, where people are giving to the campers, tents with political debates, even one for childcare.

We are not just asking for jobs. We are asking for a change in the political system.

We have no option but to vote for the two biggest parties in Spain, who are more or less the same. They are unable to solve any problem, it is just a nest of corruption.

We are tired. In short, we want a working democracy. We want a change.

These protests are not only about unemployment.

They are about the unfair political situation that exists in Spain.

We protest against the political situation that allows more than 100 people who are accused of corruption across the country to stand in the next elections.

Moreover, it is about the electoral law in Spain, which has a vote computing system that benefits the big political parties, leaving the small ones without any choice of achieving any success. 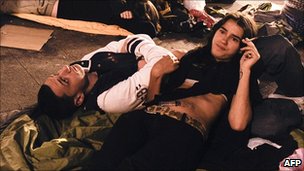 Demonstrators have defied a ban to camp out overnight in capital

I think it is a shame that the socialist government of Jose Luis Rodri­guez Zapatero is allowing an illegal campsite right in the heart of Madrid.

It breaks all the democratic rules in this country.

Most of the protesters are obviously left-wing extremists and anarchists, who wish to destabilise the democracy that took so much effort and time to achieve.

Furthermore, there is not a single placard among the demonstrators demanding jobs.

The protests are not really anti-government, but rather anti-big political parties, both the one in power and the main ones in opposition.

It's a protest that wants a better, real future, not the future that the government or parties in opposition seem to be able to provide.

The manifestos and proposals are quite left-leaning ideologically, but not linked to any political party, because right now, most of us don't feel represented by them.

The main reason to be in Madrid's Puerta del Sol is to show the anger of the Spaniards against all political parties for not sorting out the problems that we have been suffering for years.

Instead of finding solutions the main parties, PP and PSOE, spend most of the time fighting with one another.

People of all ages feel the necessity to express their point of view in a different way than voting, as this traditional way has not had any effect in recent years.

The protests began against Spanish electoral law, as we want that to change.

Then other movements started joining in and many political parties tried to make the protests their own.

But this movement is affiliated to no political party whatsoever.

It is a beautiful movement.

More on This Story