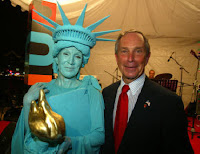 New York City Mayor Michael Bloomberg has been receiving foreign policy briefing sessions on a wide variety of topics, providing the strongest indication yet that he is considering a run for the White House, the Huffington Post has learned.
The sessions, which were confirmed by multiple sources, have been conducted with Nancy Soderberg, a former U.S. Ambassador to the United Nations and a Clinton Administration foreign policy adviser. One source described her as "Bloomberg's Condi."

A range of topics have been discussed, from non-proliferation to the defense budget, with a specific focus on the war in Iraq.
These sessions dramatically contradict Bloomberg's denials that he is planning to run for president. The one aspect of his possible candidacy that is considered missing is foreign policy experience. These strategy sessions with Soderberg seem clearly designed to fortify that weakness.

The Huffington Post has also learned that one of the main reasons Soderberg was chosen is that she is not currently associated with any presidential campaign.
Soderberg was serving in New York City as the vice president of multilateral affairs for the International Crisis Group, a non-profit organization. Currently, she is a distinguished visiting professor at the University of North Florida. Soderberg is regarded as an expert in a variety of regions, including Northern Ireland, Indonesia, the Middle East and Africa. She did not return a request for comment.

Bloomberg's term as mayor expires in 2009. But rumors have been rampant that he will announce a third-party White House bid before then. And despite repeatedly claiming he is not interested in the job, Bloomberg has made several political moves that suggest otherwise.
Earlier in the year he switched his party affiliation from Republican to Independent (he previously was a Democrat). And in November, The Daily Telegraph in London reported that the New York City mayor had held at least three lunch meetings with officials from England's Independence Party.

The self-made billionaire, who founded Bloomberg LP, is seen as a formidable presidential contender. His billions in wealth would allow him to run a campaign without financial restrictions. And his handling of New York City gives him highly regarded executive leadership credentials, while his bipartisan appeal would siphon off votes from the two major party candidates.
The mayor's press office did not return a request for comment.
Posted by Unknown at 7:55 PM