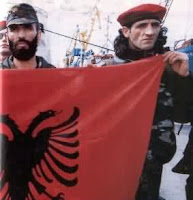 ELECTION 2008Group tied to al-Qaida backs McCain for prez'They will do all they can to turn Kosovo into a jihadist camp in the heart of Europe'
Posted: March 02, 20089:07 pm Eastern
By Jerome R. Corsi© 2008 WorldNetDaily

Presumptive Republican presidential nominee John McCain has enjoyed strong support from a lobbyist group that backs the Kosovo Liberation Army despite allegations the KLA is a Muslim terrorist group with ties to criminal drug networks and al-Qaida.
The Albanian American Civic League, or AACL, regards the KLA as "freedom fighters," said the AACL's president, former Republican congressman Joe DioGuardi of New York.
They're "not terrorist, like the Serbs and Greeks say," DioGuardi insisted in an interview with WND.

But Islam expert Robert Spencer, editor of the popular website Jihad Watch, contends radical Islam is the driving force behind the Kosovo independence movement.
"There is no excusing the excesses of the Serbs under (former President Slobodan) Milosevic, but there is no denying also that jihadists have been pouring into Bosnia and Kosovo, preparing to use them as a base for jihad activity in Europe – and we have been helping them," Spencer told WND.

Spencer explained that the KLA is directly linked to the Kosovo independence movement.
"When Kosovo independence was declared, thousands of Kosovars gathered in Pristina and chanted, 'KLA!' 'KLA!' Spencer noted. "This was a telling indication of the broad popular support the KLA enjoys."
KLA members, however, continued Spencer, were trained in al-Qaida camps.
"There is little doubt that there are powerful elements in Kosovo who are Islamic supremacist and pro-Sharia (Islamic law)," he said. "They will do all they can to turn Kosovo into a jihadist camp in the heart of Europe."

Spencer pointed out Kosovo is about 90 percent Muslim, and the independence movement has grown by incorporating Albanian Muslims as members and supporters.
"Most of the Albanian Muslims are cultural Muslims who have not been radicalized," he added. "However, the Muslims in the Balkans have been subjected to heavy jihadists infiltration and recruitment for almost two decades now."

Spencer contends McCain, along with the Bush administration, which has recognized Kosovo's independence, "are on the wrong side of the fight … just as American policy in general has been on the wrong side of the Balkans conflict for years."
During the Balkans war in the 1990s, President Clinton committed U.S. troops to fight under NATO command, providing U.S. air support for NATO-directed attacks against the Serbs.
Today, President Bush's and Sen. McCain's support for Kosovo is equally clear.

On Feb. 17, Secretary of State Condoleezza Rice announced the U.S. formally recognized Kosovo as a sovereign and independent state, saying, "As Kosovo today begins its life as an independent state, the United States pledges to be its close friend and partner."
McCain, in a written statement prepared for the Munich Security Conference Feb. 7, called on the U.S. and the European Union to recognize Kosovo's independence, saying, "For the first time the region is today poised to move forward, with final status for Kosovo and transitioning continuing responsibilities there to increasing European control – at long last closing the door on the region's painful past."

In April 1999, McCain and Sen. Joe Lieberman, D-Conn., co-sponsored the "Kosovo Self-Defense Act" with the goal of arming the KLA in their battle against the Serbs.
McCain co-sponsored the legislation despite serious concerns voiced at that time in Republican policy forums, warning the KLA was a criminal terrorist organization with ties to al-Qaida and Osama bin Laden.
The U.S. Senate Republican Policy Committee issued a white paper March 31, 1999, concluding the KLA was closely associated with.

"The extensive Albanian crime network that extends throughout Europe and into North America, including allegations that a major portion of the KLA finances are derived from that network, mainly proceeds from drug trafficking; and

Terrorist organizations motivated by the ideology of radical Islam, including assets of Ian and of the notorious Osama bin-Laden – who has vowed a global terrorist war against Americans and American interests."
DioGuardi strongly disagrees with the conclusion.
"The Serbs and the Orthodox Christian church are fighting a medieval battle," DioGuardi said. "To them, anybody who is a Muslim is a problem."
DioGuardi delved into history, arguing the Albanians were also Christians until the Ottoman Turks occupied Albania.

"Albania is the only real friend the United States has in the Balkans," he said. "President Woodrow Wilson after World War I, in 1921, forced Yugoslavia to withdraw from Albania, thus saving Albania as an independent state. Today, Albania has about 600 troops fighting in Iraq with the United States, and Albania has offered to send more."
'Just another Serbian lie'

DioGuardi affirmed the AACL supported McCain in his 2000 presidential campaign and is supporting him in his current bid for the White House.
The Serbian Internet publication, Serbianna.com, ran a story Feb. 13, claiming that in the 2000 presidential campaign, McCain accepted contributions from the AACL totaling $1 million from an event at the St. Regis Hotel in midtown Manhattan.

DioGuardi said the $1 million figure "just another Serbian lie."
DioGuardi said the AACL had gotten some 1,000 Albanians to greet McCain's bus on Feb. 11, 2000, when the senator was coming to New York City to hold some fundraising events.
"We wanted to greet Sen. McCain and show him Albanians in New York were behind him in his race to be president," he argued. "We didn't raise $1 million for McCain at any fundraiser that day."

The Serbianna.com story included a photograph showing McCain, DioGuardi and a group of Albanian supporters in the St. Regis lobby.
Another photo of the event was published on Justin Raimondo's website, Anti-war.com, showing McCain and DioGiardi again with a small group of Albanian supporters.
WND asked if DioGuardi or the Albanian community had raised as much as $1 million for McCain, regardless how many events were involved.

"Not yet," DioGuardi answered.
He admitted to being a top fundraiser for McCain in 2008 and he said he was pledged to raise as much as $100,000 this year for the presidential campaign.
"The Albanian American Civic League also has a PAC, and we have already given the maximum we can give to McCain," DioGuardi affirmed.
OpenSecrets.org documents the Albanian American PAC has contributed $5,000 to McCain's 2008 presidential campaign, while making no contributions to any Democratic Party presidential candidate.

"Whenever there is a McCain fundraiser in New York, we notify our members who can write a check and ask them to attend," DioGuardi also admitted.
While FEC records track the employment of campaign contributors, no questions are asked to determine a contributor's interest group affiliation, making it nearly impossible to determine the exact amount contributed by AACL members or loosely affiliated sympathizers.

Albanian.com, a website that bills itself as the "Home of Albanians Online," currently credits McCain as becoming nationally known in 1999 for advocating NATO bombing of Serbia and suggesting the U.S. should send American troops into Kosovo to support the KLA.
"We support any politician, Republican or Democrat, who understands the problems of the Balkins the way we do," DioGuardi said.
Posted by Unknown at 4:48 AM